Where to begin? If I were to ask my husband, Jim, he would say, “At the beginning.”  “Very funny,” I would reply.  “You don’t even know what I’m talking about.” Then he would say, with a glimmer in his eye, and the hint of a George Clooney head bobble, “I don’t need to. Why would you start anywhere else?”

Such is our life.

Our biggest struggle regularly revolves around which one of us is making sense—me in my uber-logical, analytical way, or he in his What-You-See-Is-What-You-Get way. Po-TAY-to, Po-TAH-to—that’s us. Yin and yang. Peanut butter and jelly.  He likes the meaty part of the bacon, and I like the fat. We like to think we complement each other more than we torment one another.

Which is why going into business together is fairly annoying, but also an amazing partnership. We have completely different skill sets. We take entirely different approaches to solving problems. We might as well speak different languages. But when we get over the language barrier and work toward a common goal, there is no stopping us.

Whether to start a coffee business was never a question. Practically from the day we met I knew it was a lifelong goal of his. He had done it before, too, but without financial resources or an incredibly supportive woman behind him.  The question became, “When do we start this business?”—as if we were planning our family, worried about whether we could afford this baby, educate it properly, raise it to be a productive member of society, or simply sleep at night.

When the time came, we both knew it as sure as our real child was down the hall, not sleeping. Jim flew into action. He found a storefront to rent. Bam! He started remodeling. Hallelujah, he started moving all the equipment from the last venture out of our house! At the same time, I started thinking. What do we call this strange, new baby? We tossed around hundreds of ideas. Nothing seemed appropriate. Nothing seemed to speak to the pure passion that was going into its creation. One idea was dropped due to its unpleasant definition in the Urban Dictionary.

Then, late one night as I was lying in the guest bed to escape the snoring, I asked myself, “Why are we doing this at all?”  That was when the answer came to me.  “Because Jim loves coffee.” One thesaurus look-up later, we had it: Paramour. 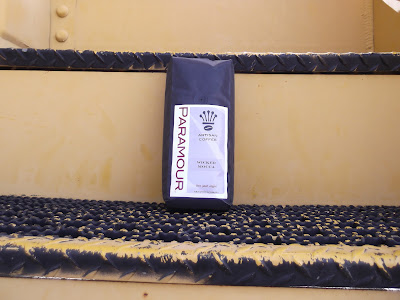 Here’s the catch. Most dictionary definitions of ‘paramour’ imply some sort of adulterous affair.  Jim definitely loved coffee long before I entered the scene. That would make ME the paramour.
Huh. I think I’m OK with that.

Just kidding. Hang on, because this is only the very beginning.

Paramour Coffee
Welcome! We are Paramour Coffee. I am Laura, and my husband, Jim, is an artisan coffee roaster who was trained by the founding fathers of the specialty coffee industry. It's safe to say coffee is Jim's first love--making me the paramour. This is the story of our business, our life, and our loves--coffee and otherwise.